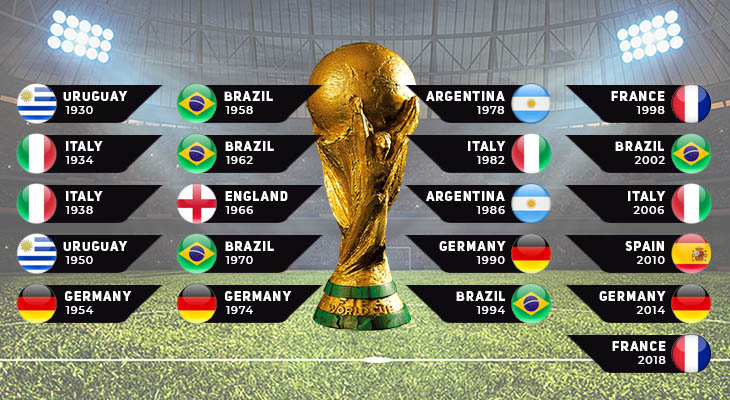 Fédération Internationale de Football Association (FIFA) is the global governing body for the football game. The members of this body contend with the senior men of their national teams to contend for the coveted trophy. The favorites never remain constant in this tournament. However, a few countries have better records of winning than others.

FIFA World Cup is the ace tournament in the football game. It started in 1930 and is played every four years with exceptions of the years when the world was going through the Second World War. This tournament is most widely watched throughout the world. People from all walks of life soak the games with equal excitement and the bettors find it an amazing opportunity to speculate and earn.

This tournament is hosted by one, and sometimes, multiple countries. By the virtue of being a host, the organizing country automatically gets the entry in the world cup squad and contends for the coveted title. Apart from the host country, 31 other countries participate in the tournament. Overall, 8 groups of four teams each are formed. However, things will change from 2026 edition when the tournament will create berths for 16 more teams. Hence, total of 48 teams will be playing in FIFA World Cup from 2026.

Let’s take a look at the top countries and their winning records at the FIFA World Cup.

Miroslav Klose is the star performer of this team. He has posted 16 goals, which is the highest in the entire history of the FIFA World Cup. Another interesting trivia about this team is that the former captain Franz Beckenbauer has contributed both as a player and manager to the Germany team.

This country has yielded top brass footballers who are institutions in themselves. They have a huge fan following and are looked upon as no less than the God of Football. Diego Maradona, the most famous footballer of yesteryears hails from this country. His legacy is carried forward by Lionel Messi in current times. In his captaincy, the team emerged as the strongest team in America and won Copa America very recently in 2021. They share the total number of times they have won Copa America with Uruguay. However, the team is looked upon as strong adversary to Brazil, England, Uruguay and Germany in 2022 edition of the FIFA World Cup.

Another team among the winners of the FIFA World Cup is Spain. It is also one of the strong teams of Europe and gives tough fight to opponents whenever it enters the turf.

Of the 32 countries participated so far, only 7 to 8 countries rule the tournament. Though other countries qualify to the tournament, they lack in facilities and the way the game is promoted in those parts of the world. Host country gets the entry automatically to the tournament and in a few cases have got it the title too, for example, France. Explore deeply about these countries with the help of football tipster if you have thought of betting on the FIFA World Cup games.

You may select multiple teams to bet upon. It helps increase chances of winning. Also, a better reputed bookmaker provides personalized services and various additional benefits like tips, bonuses, etc. All these facilities can maximize the fun of world cup 2022 predictions.