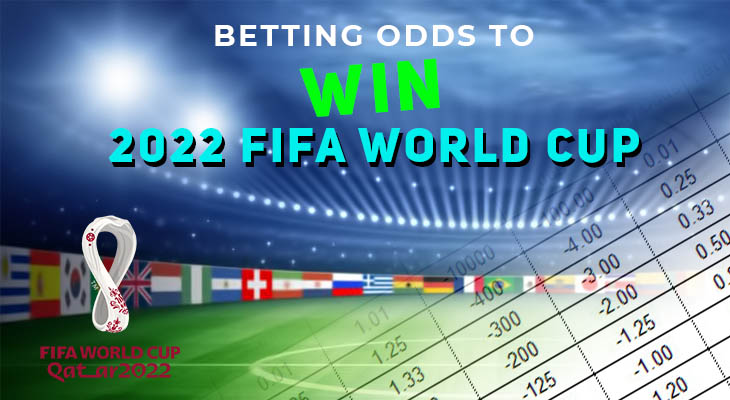 Betting odds to win the 2022 FIFA World Cup are already out. Brazil has again rose to glory of being the bookmakers’ favorite. A surprise entry in the form of England is also adding to the excitement.

Various bookmakers prepare in advance to keep the bettors glued to the FIFA World Cup Events. Odds are announced at the start of the qualifying rounds and these do change too, according to the performance demonstrated by the favorites. In the present times, Brazil seems to be determined to bring the trophy back home after 1998 and its brilliant performance in the qualifying rounds has been the proof too good to ignore.

Betting odds tally sheet as appearing at a reputed bookmaker

From the tally sheet retrieved from a bookmaker site, it seems that Brazil is back to proving its supremacy in the World Cup. The team has seen no wins in the World Cup since last few editions and may be lot more determined to break the jinx. The World Cup is being held in a Middle East country, Qatar, for the first time. Its climatic conditions during winter closely resemble the South American climate, experts suggest. That is why, experts attribute this factor to be responsible for high chances of Brazil at winning the World Cup 2022.

European countries mostly fare better when the host country is a European nation. That is why, the like of Germany, Italy and France are at the rungs below Brazil. However, one must expect lots of upsets this time because the unfamiliar conditions have pulled up most national teams to a comparative level of bettors’ expectations.

Italy – a chance for bettors to win big

Italy is yet to qualify but has qualified for play-offs. Given the kind of character and the determination to win Italians have always demonstrated, +1000 is a fabulous odd to bet upon. The bettors can have a ball of time if they put the faith on this team and back it in group matches.

USA – another big fish to catch

USA has not been among the bettors’ top favorites. However, the situations do favor this contender a lot. The climatic conditions, neutrality of the audience and the presence of key players may give some happy news to the US football fans. It does mean a lot of money for the bettors too. Currently, the US stands at the betting odd of +6600 as per the table above. Looking at the ability to create upsets, the bettors can have a good chance at winning big by supporting the USA in the FIFA 2022.

France has always maintained to be among the top 6 favorites of the FIFA World Cup. The 2022 edition is not an exception either. It is already brimming with the confidence of being the current world champions. In addition, the group stage has already seen the toppling over of the three straight defenders. Hence, the Les Blues’ chances at winning the World Cup 2022 are brighter. France can make the bettors’ cash registers swell up with +600 odd at present.

England – the new star across horizon

England has seen giving a tough fight at the turf to the opponents in European football 2020. The team has a lot of young blood included in the squad. It is most likely to be a big break for the youngsters and they will not leave any stone unturned to make history. The additional psychological support comes from Harry Kane leading the team. This amazing player has bagged the Golden Boot in 2018 and is a powerful football force to reckon with.

Germany – a good odd to consider

Germany had a good year at European Football. And, it is already ahead of its arch rival Italy in the qualifying race. This emotional impetus may add a lot of fuel to the team’s motivation. They may create a few mighty upsets and lead the European side beyond the round of 16 rounds. An odd of +900 is truly the fortune turner and is worth giving a try at the World Cup 2022 bets.

Germany is having a young squad which is certainly a plus point when the energy is a requirement. The team has a good coach too, that brings together the experience and energy. It is one of the main reasons to choose this country as a contender for the 2022 World Cup title.

A few must-watch players may topple the odds

This World Cup is going to be the last for the iconic name Portugal’s Christiano Ronaldo, the name backed by millions of fans globally. Hence, the guy may be giving his all to claim the coveted rewards like Golden Boot and Golden Ball. His name among qualifiers can be your chance to make it big from the 2022 World Cup bets. Keeping this name on the radar is not a bad idea at all!

Other names that have added to the excitement are Netherland’s Virgil Van Dijk. It has put the country among the high-paying bets to eye for. So, if you want to just go with the trend and bring in a lot of luck and favoritism factor, you may take a chance or two by placing money on Portugal side or Netherland’s side in the World Cup 2022 matches.

World cup 2022 prediction to win the FIFA World Cup have a lot to indicate, but nothing is final unless it has happened. The World Cup does see new names breaking into the popular hex. Thus, you have to enter the name on the betting slip with open mind. Needless to say, emotions are not going to help. One has to have the latest records in hand to understand the teams’ real chances.