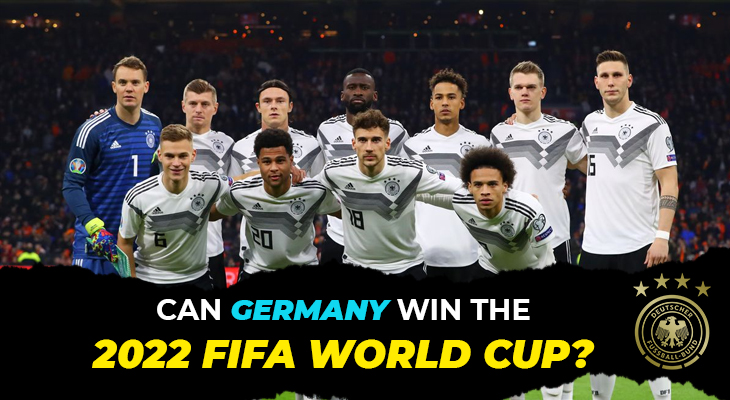 This year, the FIFA World Cup is taking place in Qatar, but until 22st cup you cannot see you favourite players playing. Ever since the COVId-19 regulations were passed, there was no match, but that is not the case anymore. You will get to see all your favourite players this year from 21st November till 18th December.

All the stars from the field are going to be there, and if you are a football fan, you will surely love every minute of it. that being said, everyone has a favourite country they will be supporting. While Brazil has been predicted to be the winner this year, given their odds of beating other teams, Germany is not far behind.

Germany, rising from the ashes

It is not a surprise that Germany has not been able to make its mark in the field for the last couple of years. However, with some much needed changes in the team, things are now looking up for them in this next era. This has further excited fans of Die Mannschaft and they are hoping to make all the way through the finals of this year’s World Cup.

The new manager Hansi Flick has already started his work on the staff, strategy and roster, solidifying his plans to win his team this year’s cup. If you have followed Hansi Flick’s way of working with a team, he will right away start building relationships with the players, and make the necessary changes that allow his players to bring back the form Germany once was known for. If you are a fan of the team, here are three reasons why you should be positive that Germany can fight all odds and pick up the trophy this year.

You have guessed it right, Hansi Flick is one of the main reasons why Germany’s chances this year are looking bright. Not only has he proven himself to be a master strategist in the past, but the former Bayern Munich manager has a lot more to offer. He pioneered this more intimate and personal way of managing his team which keeps the teams morale high and ensures better performance in every game.

Even though some might find Flick demanding and to have very high expectations off of his players, but that is only because he knows the true potential of his players. His way of dealing with his players makes them feel freer and relieves them of any tension or burden.  If you remember how he turned a confused and bitter locker room in Bavaria and converted them to winners, there is no reason to not believe why he cannot do the same with Germany’s squad this year.

More so, Flick has one thing by his side, that many other managers do not, which is time. for instance, when he took over Bayern on the fly, many fans yearned for Mauricio Pochettino, Jose Mourinho, even Erik Ten Hag. Even with all those odds, Flick managed to re-build one of the all-time best squads Bayern had seen in a long time. the sheer strategies and personable style with which Flick manages his teams is enough to ensure a good play this year.

The best squad yet

When Flick was with Bayern Munich, he wanted to sign Timo Werner and Kai Havertz to the club. He also quickly learnt where Thomas Muller could use his skills best, helping Der Raumdeuter have one of the best, efficiently played and most effective periods of their career. He was also the first coach that knew how well Leo Goretzka and Joshua Kimmich could fit the centre midfield position, which went on to be a fundamental foundation for Germany later on.

When Joachim Low prematurely cut Mats Hummels, Jerome Boateng and Muller, the squad automatically lacked devotion, leadership, identity and character. Flick already knows that and will build his team keeping that in mind. This can lead to be a big advantage for his management. In addition to that, the downtime Germany witnessed in most of their European Championships has fuelled their desire to win this time.

Flick will keep all that in mind, strategize the best way to use the players, and learn who can fit which role most efficiently. Evaluating Germany’s playing style during that off-season also helped him learn which players need to go, and who might be a good addition to the team. Germany surely has true potential to be a fierce challenge in the World Cup and now with the right manager, they will be able to best utilize it.

It is a level playing ground

While earlier, there were other teams that had the best form, which is missing from this year. For instance, when France had that unravelling on the field, where players openly bickered, it just shows that do not have the same united mind-set they did in 2018. It would not be far-fetched to say that Didier Deschamps has lost some faith in quite a few players of his team. Similarly, teams like England, Italy, Belgium, Spain and many others are not in their best shape.

The next name that comes to mind when talking about the best teams is Brazil. While it is true that many football fans are rooting for Brazil and quite deservedly so, it is because of their sheer talent. Brazil might have a bunch of very talented players on the field, but without proper guidance and leadership, they are heavily flawed. While there is no sure way of telling who might take the trophy home this time, Germany surely has much better odds when compared to other such teams.

Reading all that, it is easy to understand that ever since Flick has taken responsibility as the team’s manager, Germany has become invincible. As of now, there is not much that says any differently.  Anyhow, whether they win the title this time or not, the World Cup will surely be a great watch and have some amazing matches.