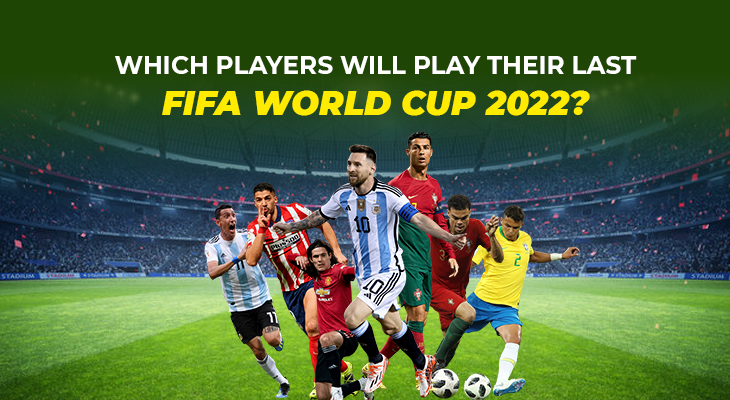 With the FIFA World Cup taking place in Qatar this year, everyone is on the edge of their seats. After two and a half years of not seeing your players on the field, for any kind of international match you will again get to see them play for their country. The World Cup is undoubtedly the best place for all players to showcase their skills and proficiency. However, the bad news for some fans is that this will be the last World Cup for some of their favourite players. The players who are edging closer to their retirement age include a lot of the top names as of now. The players you will most likely not see ply another World Cup include:

Known to all, Lionel Messi is perhaps the best player in this generation and will be considered as one for as long as football exists. He is a record winner of the Ballon d’Or, with seven trophies just to his name. this winner has redefined football skills and inspired many with his play. However, this might just be the last time you will witness his play on the field. He has made 162 appearances for La Albiceleste, with 51 assists and 86 goals. The World Cup is perhaps the only trophy that is missing from his cabinet, and this year might be the season he takes it.

Ronaldo’s name has perhaps become synonymous with football and quite well-deservedly so. He is an all-time leading scorer in the game with 117 goals in his 189 appearances and 42 assists for the Portuguese national team. However, at 37 years old, he is not very likely to play another World Cup for his country, nevertheless, there is a lot riding on him for this year’s World Cup and all fans expect him to give his all.

Holding the Portugal team strong with his centre-back skills, Pepe will surely go down as one of the greatest players in history. 38 as of now, he has been called up for all four matches of the Portugal Euro 2020, forming a true partnership with Ruben Dias. Even though the World Cup qualifiers are not yet finished, Fernando Santos’s side is more likely to make it to the tournament. Anyhow, the 2022 World Cup will be the last time you will see this beast of a player competing in any kind of international match considering his age and the potential of new and younger talent.

Known to be one of the best strikers in his generation, this World Cup might just be the last one where you get to see him play for his country. He has helped with more than 17 assists and 56 gals in the 129 appearances for his country, which is comparable to some of the best players. He is most well-known for his heading ability and clinical finishing. However, he is now 35 years old and recently left Manchester United after the contract expired. He is now playing as a free agent and is still revered on the field. He will surely go out on a high in this year’s world cup.

Another Uruguay player who is supposed to make his final appearance in any international match is Luis Suarez. Cavani’s strike partner, Suarez is also held in high regard by his fellow teammates. He is most well-known for having the most well-rounded attacking skills on the field and has surely made an impression in every match he has played. However, he too is 35 now and will be showing up in his jersey for the last time this year. According to fans, he is already well past his peak years and his form has only deteriorated with time in some of the more recent seasons.

He is one of the more important players on Argentina’s team and has surely made an impression in the last 10 years. Even though his absence in the last season for his injury is considered to be one of the main reasons why Argentina lost to Germany in 2014’s World Cup. DI maria’s most well-known goal is when he scored the winning goal for La Albiceleste’s final in 2021’s Copa America. This 34-year-old joined Juventus as a free agent this summer but surely does not possess his peak skills. Although he is still a great footballer, this might be the last time you will see him play for his country in the World Cup.

If you have loved how Germany hanged their attacking pay in the last decade, Marco Reus was probably the reason. He is considered to be an all-time great and has surely proved his skills on the field. Unfortunately, he has only been included in some of Germany’s matches, mainly because of his injuries. Making an appearance only 48 times for Die Mannschaft, he has scored 15 goals and helped with 14 assists. Although he has only played 3 games in last year’s World Cup, most fans are hoping they get to see him more on the field this year around. However, this year might just be the last chance for this 33-year-old to impress his fans once again.

Brazil is perhaps one of the teams that have been known to have the best payers in football. Similarly, Thiago Silva has been considered an all-time great in the field and will always be revered as one. The 37-year-old has been the team’s main man in the defensive third, helping stop most attacks from opposing teams. However, since he is nearing his 40s already, it is not very likely that he will be seen in 2026’s World Cup. This year Brazil has the most pressure for winning the World Cup, and with players like Thiago Silva, it is most likely that they will.

These are some of the most recognizable names in the football industry who might just play their last World Cup. Nevertheless, all of them will go down as some of the best players in football history.

Get Qatar World Cup 2022 predictions and betting tips with Soccer Tipsters, including match predictions as well as top scorer tips, outrights and more.