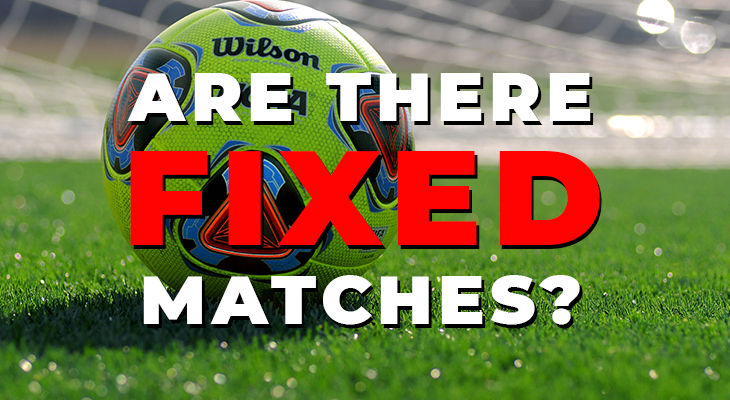 Every football match ends in one of the three possible outcomes – win, lose or draw. Most times, the outcome is achieved organically. However, when the conditions are orchestrated to bring the match to an outcome that teams have already agreed upon, it is called a fixed match. For a layman, identifying such match may not be easy. But, if you pay close attention to referee calls, player body languages, etc., you may smell something fishy. So, yes, as a sport lover, no matter how much you hate the fact, the fixed matches exist.

How is match fixing done?

A match can be fixed at many levels. It is not pertaining to deciding the winning or losing side of the match only. Sometimes, several in-play conditions are chosen to fix in advance. These conditions are not easy to catch too, because almost everyone is absorbed in the progress of the match and cannot identify a fix camouflaged as an error by a player or a referee.

In match fixing, the referee or umpire can play an important role. Since they are the final decision-maker in several calls, such as showing a red card or yellow card, giving a penalty corner or hit to the team etc., they can easily deflect the course of the match. Since match-fixing is done to make money, it is certainly an illegal activity.

Why do people fix matches?

The prime reason for fixing the matches is – to make money. With so much money riding on an outcome of a match, bookmakers try to control the results using their power of money. They can do some background checks on the players’ profiles and coerce them to lose the match by showing poor game in exchange of money. In other instances, the referees or umpires are allured into the money trap so that the bookies can win humongous profits by turning the match’s outcome in their favour.

In this money-making scheme, only a few players are pulled in. Since the whole team may not give into the allure or may have other agenda in mind while entering the turf, the scheme is shared with select few people only. It also helps keeping the scandal confined to a few people and stop it from leaking out. Else, the outcome may become quite hazardous for all the parties involved.

Another reason is ‘tanking’. Quite popular in US football betting scene, tanking is a tool used by constantly losing teams to improve their chances at draft pick. At the time of annual selection, the teams get into high bidding strategy. The players fix the matches to appear as an eligible option to selection makers and get selected in the desired teams.

How can one detect a fixed match?

There are several parameters that can indicate the possibility of a match being fixed. First is the way goals are scored. If there is no tough fight posed and the errors made are extra-ordinary silly, or missing a goal could have turned the betting outcome phenomenally, you can insinuate it as a fixed event. Such allegations are hard to prove because there is no proof and the reasons given by the involved players cannot be refuted as vague with assurance.

What goes outside the turf, i.e., the odds on the match can also be studied to ascertain if the match is fixed or not. If the odds are like 7/1 or anything more, and the players have viciously teamed with the bookie, they can work towards fixing the match so as to share the profits they make.

There are a few online tools developed for checking the fixed game. These run on an algorithm and keep note of a few parameters. If all the parameters are satisfied, the report generated may brand the match as fixed. So, it takes the human error away and also allows the bettors to understand whether it is safe to bet on the game or not.

Why is match-fixing a glaring issue?

Sports should be played for fun and only the truly deserving men should get to win. For some players, it is the matter of their career, and for those suppressed by the bookies, it can become a matter of life and death too. The greed of making a lot of money too quickly and the desperation to become a powerful controller of the game leads to bookies resorting to violence and other crimes. Thus, it takes away the innocence and truth from the sports space and convert it into a mess.

Match-fixing has become a part of activities where the organized crime is involved in some countries. It creates the breeding ground for unaccounted money, tax violations and several crimes. Sometimes, the players receive life threats, too, if they don’t agree to fix the match. It is why, the strict rules are being formed and every possible attempt is being made to keep the football clean and ‘truly’ available to the deserving players.

Who benefits the most from match fixing?

Of course, it is the bettors that benefit the most from match fixing. They have all information and know the outcome in advance. Thus, they can inflate the odds and make them more appealing to other gullible bettors. It is just like cheating in the game.

Another interesting part is that the bookies may not accept humongous stakes, they have financial limits. Thus, the bettors may go to illegal agents and get the betting process going. it is where the crime starts and the money earned is certainly not the one coming from clean means.

You must stay away from the betting tipster sites who claim to offer fixed bets. There is no concept as such and the bettors are simply trapped with these kind of offers to drain them financially. It is better to keep in touch with genuine sites like soccertipsters.net. This site highlights the blacklisted sites that make bogus tips or are indulged in fake fixed bets. It can help you stay safe while staking on the bet and enjoy it to the full.